Pac-12 After Dark this weekend is a colorful night under the lights. Oregon brings its full school colors out against Stanford. This green/green/yellow combo is relatively uncommon for the Ducks. Last time was Civil War 2013 and then you have to go back to single games in 2004 and 2005—all victories for seemingly its only other use. 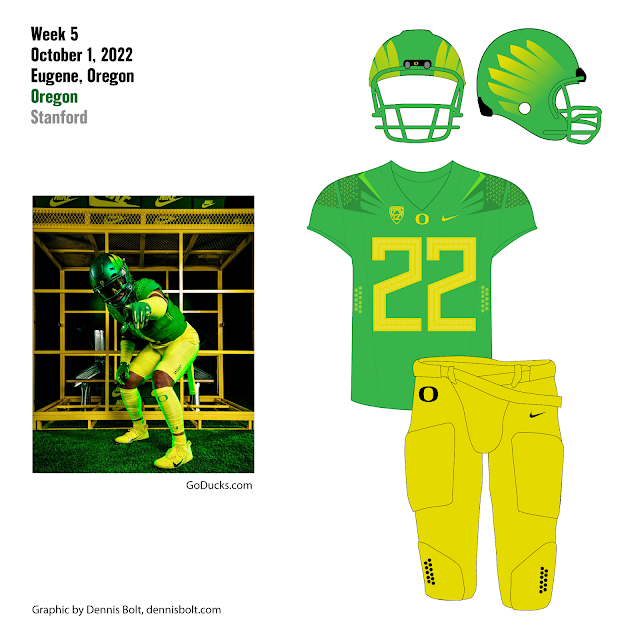 Posted by DENNIS BOLT at 6:57 PM No comments:

Pac-12 play begins with the Ducks traveling to always-difficult Pullman to play WSU. The Cougars are wearing their mono-anthracite, which the underdogs famously wore to beat the Ducks in 2018. That day Oregon wore silver/white/white so it was an elegant—if not boring—matchup.

This year the Ducks hope to avoid a repeat (thankfully ESPN Gameday crew is not in Pullman this year) and garner some road mojo by replicating their look from their 2021 trip to Ohio State with an all white set. That was the last time the Ducks went full stormtropper, and before that you have to go back to 2016 to find the last use of all-white. The little bit of green in this set will provide the onyl real color paired with the dark WSU set. 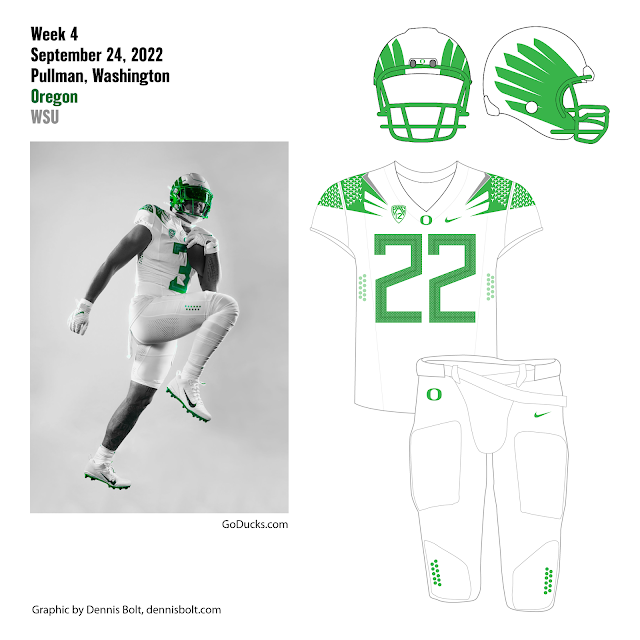 Posted by DENNIS BOLT at 6:15 PM No comments:

For the BYU game Oregon wore its mono Nightmare Green uniform. Since they did not wear Nightmare Green jerseys last season, this is the first use with the diamond plate shoulders that debuted in 2021. This is also the first time since the 2019 Pac-12 Championship game victory that they have worn this combo, and they also wore this look with the chrome helmets in the 2020 Rose Bowl. They wore Nightmare Green helmets and pants twice last year paired with the "eggshell" jersey. 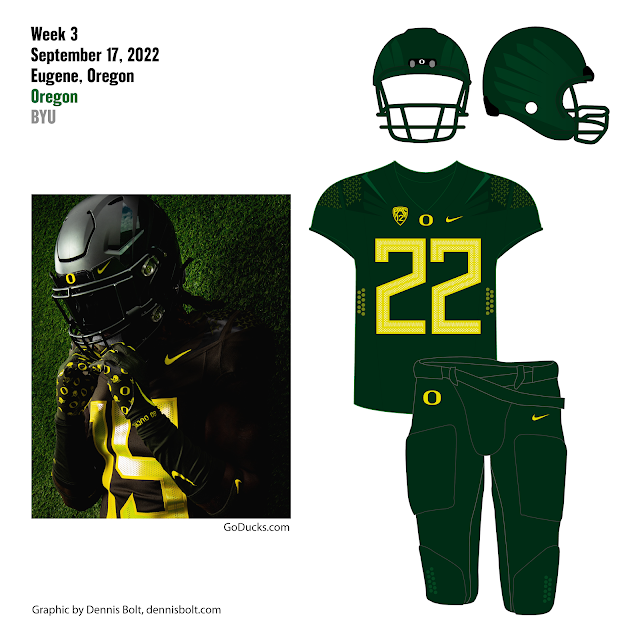 Last weekend was a great uniform worn in a horrible game. It will be interesting to see what becomes of the mono-apple green in the future.

This weekend the Ducks break out the yellow and black. This appears to be the first use of yellow helmet with solid black wings and facemask. And this exact combo is being used for the first time. There was the loss to Boise State in 2008 that used the dreaded "grellow" helmet which was kinda yellow but also had lots of dark green parts.

It feels like yellow and black have been common the last decade or so, but this is only the second time since 2017, because Mario Cristobal used Nightmare Green instead of black most often. Almost always when the Ducks where a yellow helmet is is in a mono-yellow set or non-yellow jersey. 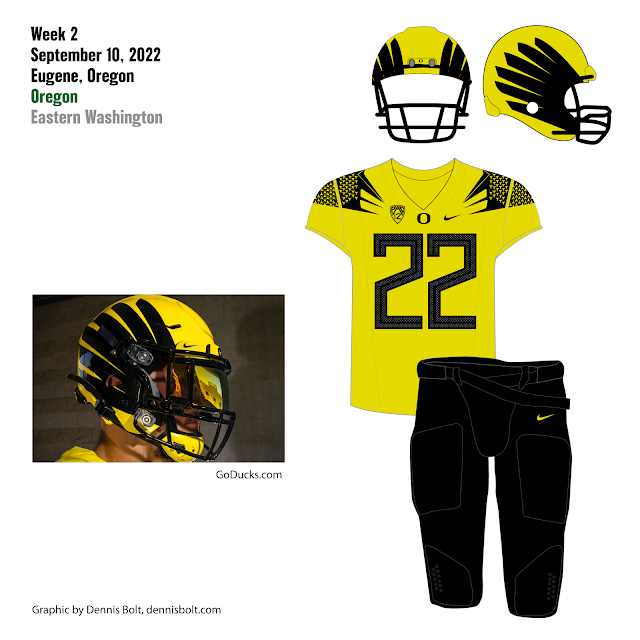 The Dan Lanning era kicked (literaly since they only scored a FG) off with this all-apple green combo against a dominant Georgia in Atlanta. Being a special kickoff game the teams went color-on-color. It was like Christmas (but no gifts for the Ducks) in September!

They last went mono-apple green in last year's game against Oregon State. Their most famous use of this combo was in the Mariota Rose Bowl victory against Florida State in 2015. 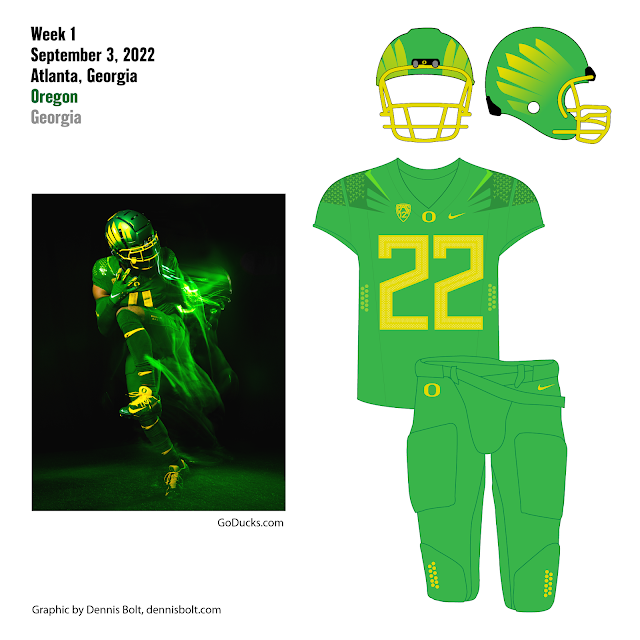 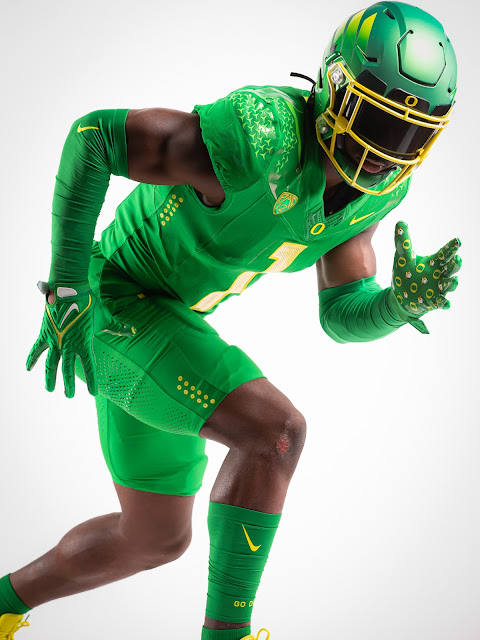 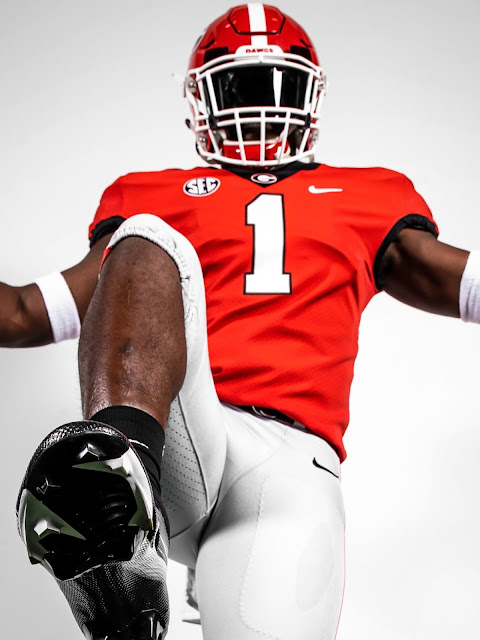 Posted by DENNIS BOLT at 6:15 PM No comments:

I'm a bit late, but this is what the UO says to wear to each game this season, which might give some clue about the player's uniforms? Doubt the Ducks are wearing green jerseys in away games against Georgia, Cal and Colorado, but who knows about pink vs UCLA? 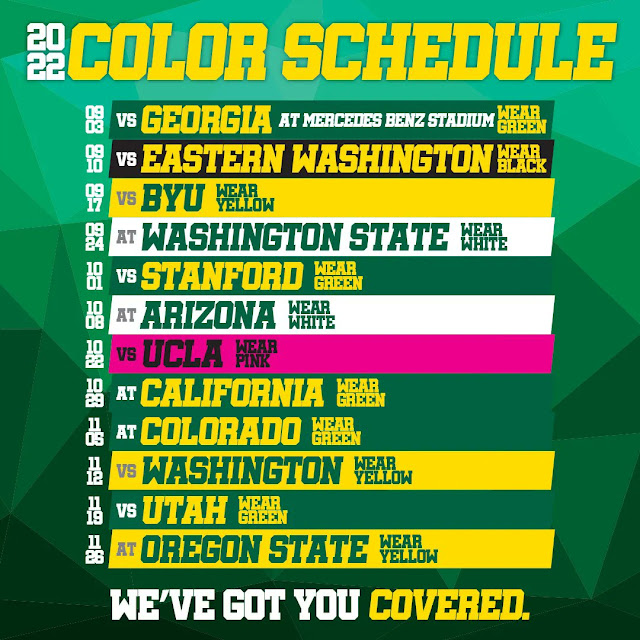 Posted by DENNIS BOLT at 4:46 PM No comments:

Only 10 days until the big game with Georgia and we are still wondering what the Ducks will wear!

I've done several blog posts on their big game attire over the years:

The Curse of Grey pants

Read more »
Posted by DENNIS BOLT at 8:31 AM No comments: