Oregon made only a few changes to its uniform this summer, but one interesting development was the lack of a black set. Instead they showcased a dark green that they call "Nightmare Green" They wore it in their opening night loss this season.

The last time Oregon sported a dark "Thunder" green was 2014 during the Mariota years. All of Herbert's 3 previous years have been wearing the pretty and bright "apple green"

This is especially interesting since black has been a major element of the uniforms for the last decade. In my unofficial count of color combos since Chip Kelly started in 2009, the Ducks have played 44 games with at least one of the three main parts (helmet/jersey/pants) being black. And that is not even counting dark gray, silver, etc. So if they averaged 12 games each year, that is 36% of the time!

So how about the combo they sprung on us this last weekend, during a high profile season opening at a neutral site? It was supposedly dark green and white, but to my untrained eye it looked REALLY dark, bordering on black.

As I mentioned in my week one post, the last time this dark/white/dark combo has been used:


One of my very first posts as Ducktracker in September 2015 was a post about how the Ducks tend to tank on the big stage when they don't wear school colors. That "laundry list" started with the infamous Boise State punch game loss. (all white) and rounded up the 13 losses from 2009-2015. Spoiler alert: Many of them came wearing non green/yellow uniforms. 9/13 of those losses came wearing no green/yellow. 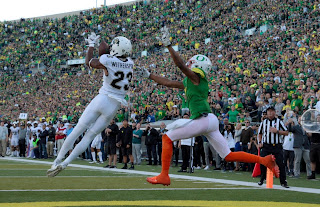 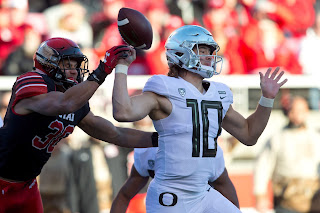 So, what's the trend over 4 years of losses?

In 21 losses during 2015-2018 a vast majority were on the road, so the jerseys tended to be white. But a large proportion of those occasions also had no major green/yellow, but instead opted for whiteout or lots of silver. The times they lost at home tended to be the most cartoonish of uniforms: The Lewis and Clark commemoration, the blue Webfoots Oregon flag set, and the orange-socked Duck mascot version—all combos that have now become imfamous, much like their "grellow" helmets from 2006.
What next?

Not to say any set is "cursed" but I might avoid going on the road without much green or yellow to offset the white jersey, and stick with nice solid home sets. While Oregon got the whole chrome helmet trend going, it might rethink it. Revolutionary advice, I know